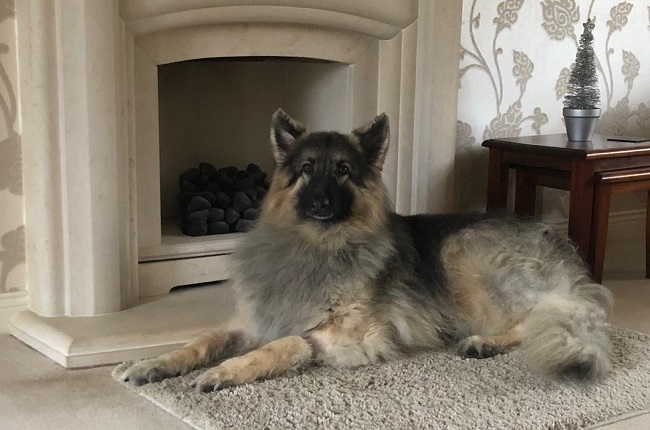 After a lovely family Christmas Day, Vito’s owners awoke at 4.30am on Boxing Day to find that Vito was very poorly. He was continually trying to vomit, was unsettled and his tummy looked swollen. Vito’s owners immediately called us and spoke to our on-call vet, who asked a few questions and immediately became concerned about Vito, asking for him to be brought to the surgery straight away.

When Vito arrived, his examination findings were suspicious of a Gastric Dilatation and Volvulus (GDV), otherwise known as “bloat”. GDV is a condition that most often affects large and giant breeds (deep chested dogs), such as German Shepherds, Great Danes, Weimaraners, St. Bernards and has even been seen in Labradors. The stomach enlarges and fills with air and twists (it is not known for certain which happens first), meaning that the air can’t escape, with the spleen commonly getting twisted along with the stomach. The pressure from the enlarged stomach affects the circulation and parts of the stomach, gut and spleen can begin to die off. As the condition progresses, dogs become weak and collapsed as the blood supply from the back end is affected, toxins build up, blood pressure changes and heart arrythmias start. Without immediate attention, the condition rapidly becomes fatal.

Xrays of Vito confirmed a GDV and Vito was stabilised and rushed to surgery. Thankfully the surgery went well and Vito recovered initially with us, then at home, and at the time of writing of this article is starting the gradual return to normal life.

We hope that Vito’s story will help to save other dog’s lives by raising awareness of this often fatal condition. If your dog is repeatedly retching or vomiting, drooling and is restless, especially if they are a deep chested breed and their abdomen looks swollen, don’t wait – contact us immediately. Time is definitely of the essence with a GDV and Vito’s owners certainly saved his life by their quick actions. Whilst we don’t always know what causes bloat, we always advise that large/giant breed dogs are not exercised after eating, are fed more than once per day and should be encouraged not to eat rapidly (perhaps with a special bowl to slow eating). Vito is 8 years old, which is typical as it appears that the risk increases with age.

This article is in no way intended to replace individual veterinary advice.